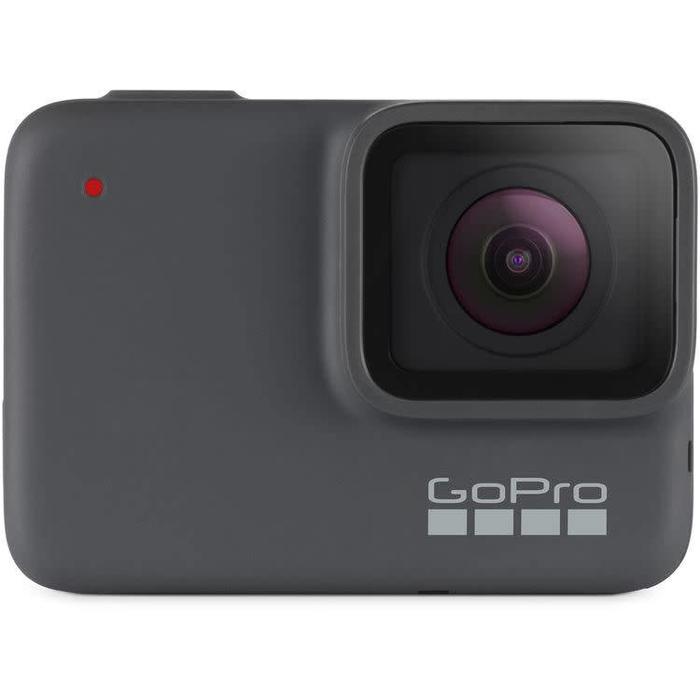 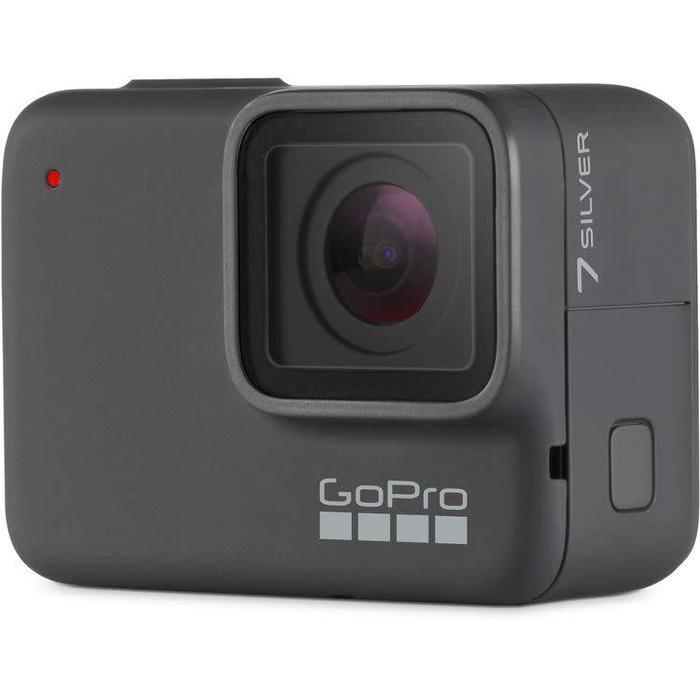 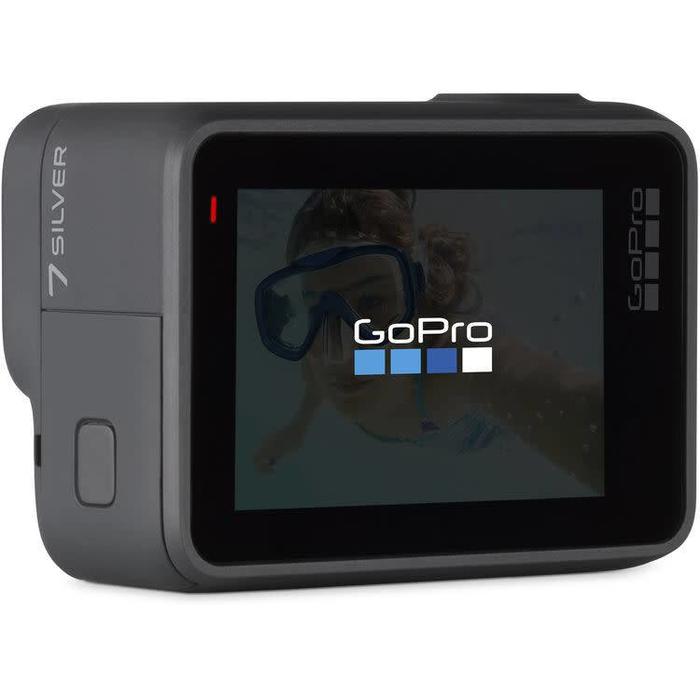 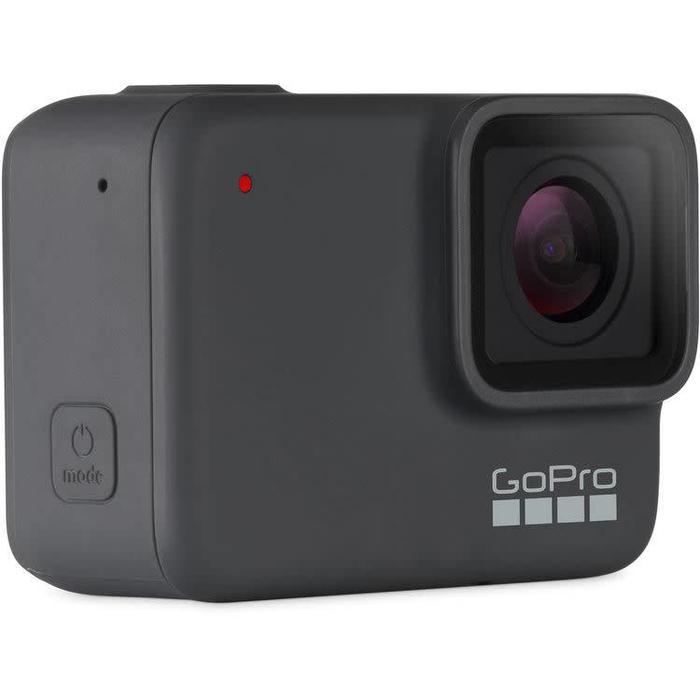 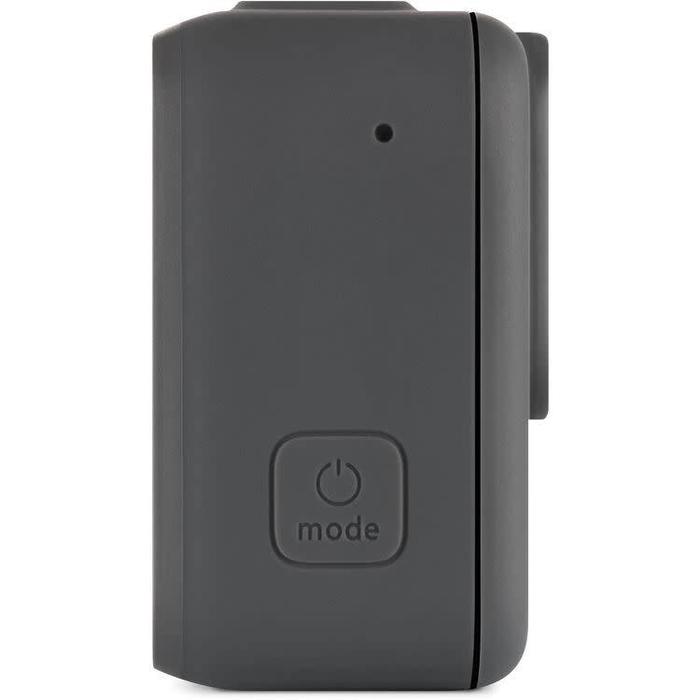 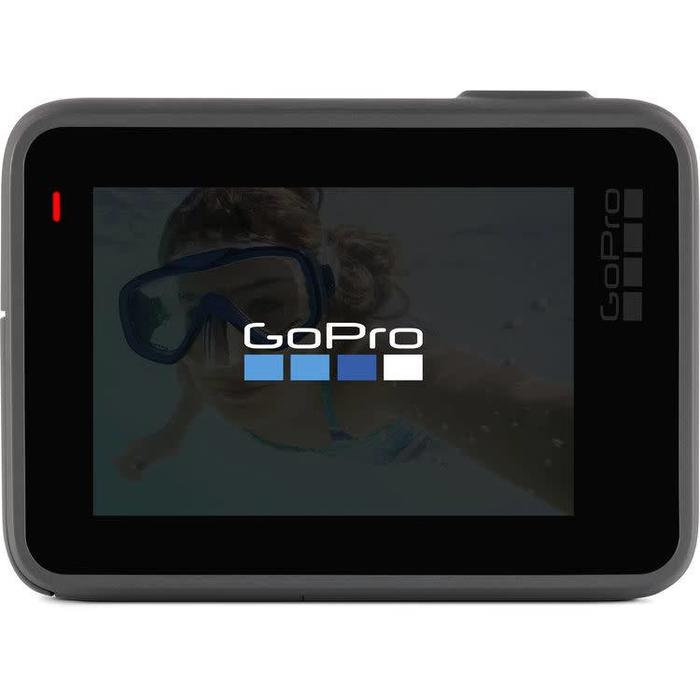 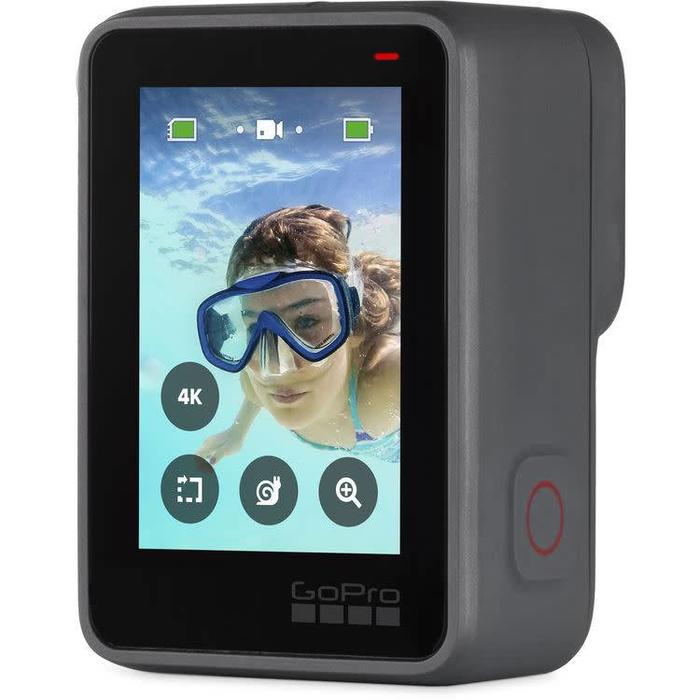 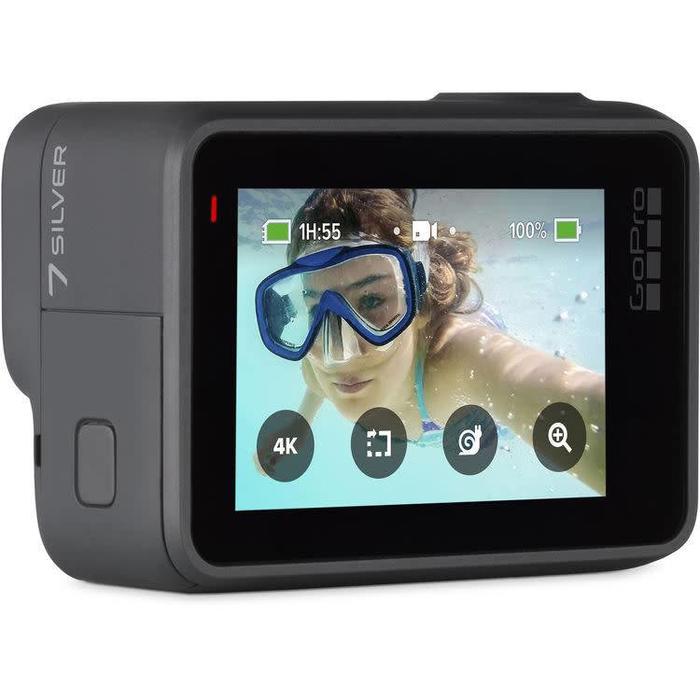 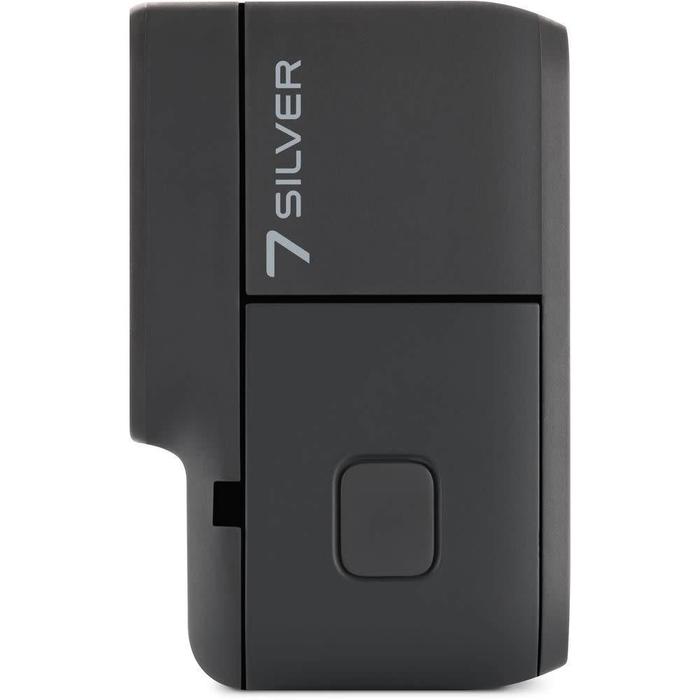 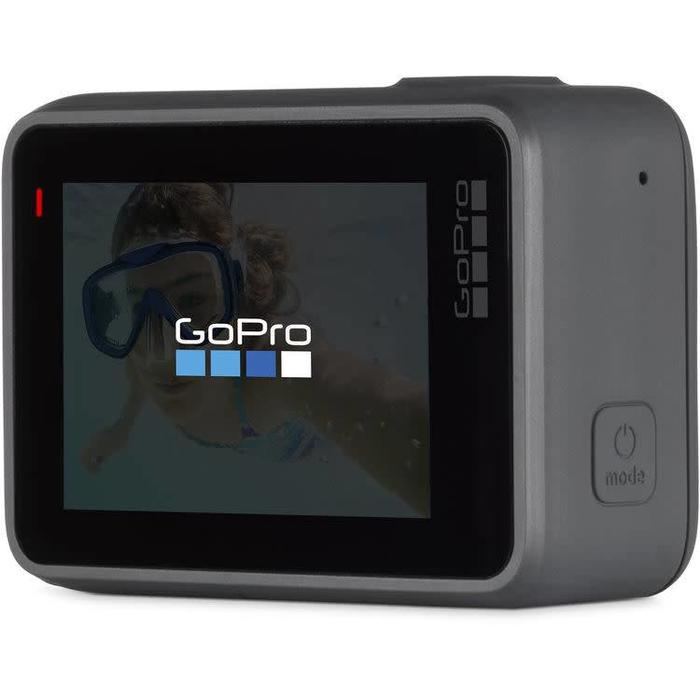 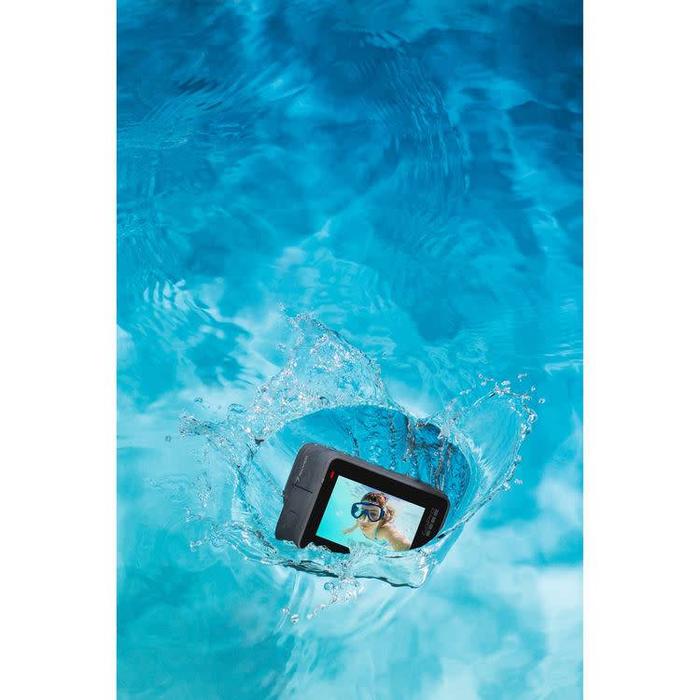 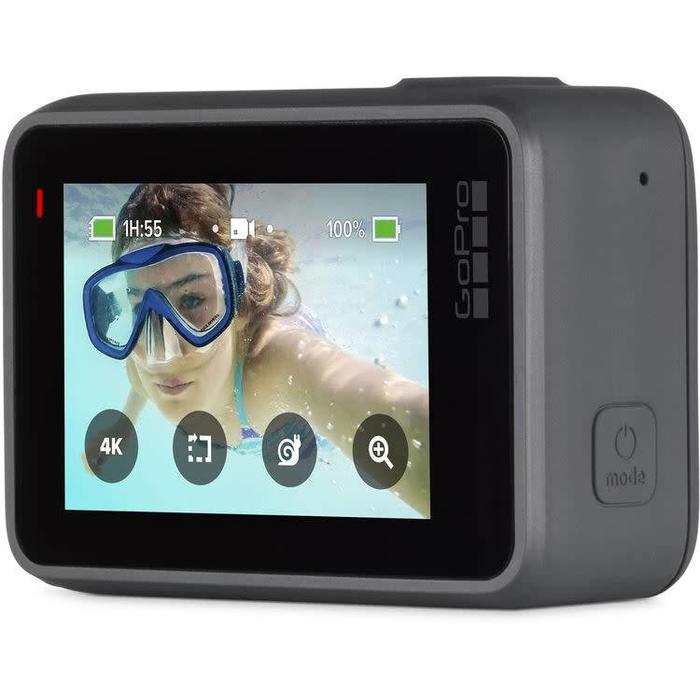 The second most advanced model in the HERO7 lineup and one of the most advanced action cameras of its time, the GoPro HERO7 Silver records 4K video at up to 30 fps, shoots 10MP photos, and offers many sophisticated features to go along with the image capture. These features include digital stabilization for smoother video, voice control allowing for hands-free commands, a photo timer for individual and group selfies, and a GPS function that tracks your speed, distance, and other factors and lets you document these in the included GoPro app for iOS and Android.

The camera is waterproof down to 33' natively, without any housing required. It's rugged and rubberized and has an intuitive 2" touchscreen display on the rear. A Touch Zoom feature provides a quick and effective way of framing your shots using your fingers on the touchscreen. Other features include time-lapse capture, wide dynamic range (WDR), and a portrait mode which allows you to physically turn the camera into a portrait orientation and shoot portrait photos that you can seamlessly upload to Instagram, Snapchat, and other social media sites. The HERO7 Silver operates on a built-in rechargeable battery. Please see the Features section below for a list of all the features.

Video Stabilization
The HERO7 Silver digitally stabilizes your video to remove camera shake so that your footage comes out smoother and steadier.

Shoot Vertically
Flip the camera to the side and capture photos and videos in portrait orientation, perfect for Snapchat and Instagram.

33' Waterproof
HERO7 Silver is waterproof down to 33' natively, without a housing.

Intuitive Touchscreen
The HERO7 Silver's 2" touchscreen display allows you to quickly and intuitively jump right into the different capture modes of the camera.

Photo Timer
A photo timer makes it easy to grab a GoPro selfie or group shot with everyone in the frame.

Auto Transfer to Your Phone
Your photos and videos move right to the GoPro app so you can post, text, Tweet, or Snapchat them fast.

GPS Performance Stickers
Track your speed, distance, and more. Add stickers to your videos in the GoPro app to show off how fast, far, and high you went as the action unfolds.

QuikStories Enabled
HERO7 Silver automatically sends your footage to the GoPro app where it transforms into a fun, shareable video with music and effects. (QuikStories requires the GoPro and Quik mobile apps, available free for iOS and Android.)

Auto Backup to the Cloud
Free up space. With a GoPro Plus subscription, you can back up unlimited photos and 250GB of video right to the cloud.

Fast-Charging Ready
With the Supercharger power adapter (sold separately), you can recharge the camera battery fast and get back out there.

GoPro Accessories
The HERO7 Silver is compatible with over 30 accessories that help you get unique perspectives and capture everything in more creative ways.

GoPro Apps
GoPro and Quik apps allow you to access and edit your GoPro footage with simple-to-use yet powerful functions. Quik Stories combines the functionality of both apps, automatically downloading GoPro footage from your HERO7 Silver and composing an easily shareable montage of your adventures on the spot.

GoPro (iOS/Android)
Use your iOS or Android device to live-preview and play back shots, control your GoPro, and share on the fly.
- Live preview makes it easy to frame the perfect shot
- Get full remote control of all camera functions
- Share photos and videos to Instagram, Facebook, Twitter, and more

GoPro Quik (iOS/Android)
Edit videos with just a few taps.
- Analyze your photos and video clips to find great moments
- Add transitions and effects, and sync everything to the beat of the music
- Customize your story with text, filters, music, and more

GoPro Quik | Desktop (Mac/Windows)
Import and edit your videos with just a few clicks.
- Transform your footage into edited videos synced to music
- Automatically import your photos and videos and share your best shots
- Comes bundled with GoPro Studio for more advanced editing